Well, today was SURGERY DAY! We were up early, in fact Camden woke up at 3 am and could not go back to sleep. We were able to let Claire sleep until we left at 6:15, which was earlier than we initially planned due to the bad weather. Claire was not happy that we woke her up, but was a good patient as we headed to Tyler Square. When we arrived, as you see from the picture, Claire seemed to know what was about to happen as she frowned for me in the car. We went in and Nana, Marme and Papa all came by to cheer Claire up. We finally were taken into the first waiting room at about 7:20 and waited there for the doctor until 8:40. Claire was VERY patient and kind, sitting in my lap, only to grow more cranky as time for the surgery grew near. About 10 minutes before the nurse took her back, they gave her some medicine that made her drowsy and it was GREAT entertainment for me and Jeremy. Claire laughed at everything, slurred her speech and could barely hold her head up. The surgery lasted about 25 minutes and we then were able to be with her in the post-operation waiting room at about 9:20. Claire was VERY UNHAPPY and wanted nothing more than that IV in her leg taken out, so finally 20 minutes later they did and she calmed down. We waited there for over an hour and were finally released. She was such a brave patient and we were so proud of her. The surgery was a success and she actually is now playing with Camden and acting as if nothing ever took place! Thanks for your prayers. We all made it through just fine!

Claire with a frown, before heading into the surgery facility 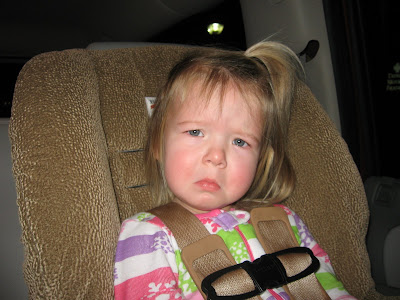 It was so good to hear that Claire's surgery went well. Take care.