Friday after lunch my parents, Jeremy, the girls and I headed down to Waco for our annual trip to Baylor Homecoming. I had some ideas of things that I wanted to do while we were there, and luckily, we were able to do most of them. I just had to learn to be flexible. I assumed that since we left around 1:00 on Friday that the girls would probably take a little nap in the car, which would have been GREAT!. However, Camden slept about 20 minutes, which was not long enough to compensate for the fact that she was awake at 5:00 a.m. And, Claire did not sleep at all. So, they were a little irritable and cranky by the time we got to Waco. We stopped by the campus to see the bear and do a little shopping at the bookstore. We then went to dinner, where they behaved rather well considering no naps. Then my big plan was to get costumes on and go trick-or-treating. But, then our meltdown occurs. Camden was adiment about NOT putting on her costume, NOT trick-or-treating and NOT going to Baylor Extravaganza. We even drove down Austin Street and saw TONS of kids going door to door getting candy. I thought that might change her mind, but no. So, as sad as I was, I said OK-no costumes and no trick-or-treating. But,I went against Camden's wishes and we stopped by Baylor to see what was going on. Once she saw the ferris wheel, I had her attention. We waited in line about 30 minutes to ride it. As we got closer in line, Claire decides that she wants to ride, too. I wasn't sure how she would react to it, but I took a chance. Claire rode with me and Camden rode with Jeremy. I think Claire was the most excited out of everyone. She was leaning over and waving to my parents. What a dare devil! After getting some candy, we called it a night. Saturday morning we went to the parade. The girls got SO much candy that it was probably a good thing that we didn't go trick-or-treating. They loved the big bear balloon and the band. Then we headed to lunch and then my dad and Jeremy went to the game. The four girls took naps! Saturday night we went to dinner and then walked around campus, trying to take some cute pictures of the girls. What a fun weekend!! Sic 'em bears!!! 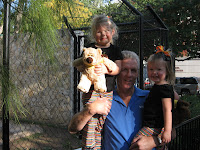 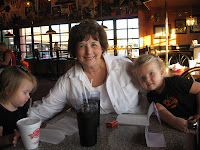 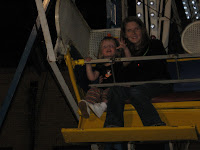 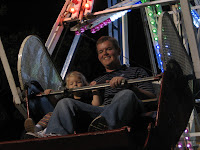 I love all your parade pics and the girls in their BU gear. TOo cute! Wish I could've been there!

jaime,
i know you missed being at bu this weekend, but just think..next year will be SO much more fun. sweet caroline will be ONE YEAR OLD!!! can you believe that??? hope ya'll are doing well.