Today at MOPS, Camden as involved in a little accident. The teacher was trying to raise the blinds so she could look outside when the blinds came out of the brackets and fell. They hit Camden's head just right and made a huge gash. She was bleeding profusely when the teacher brought her to me. A friend quickly grabbed my keys and drove us to the emergency clinic where we got right in. We were pretty sure she would need stitches, which the doctor confirmed. She was doing OK if she could sit in my lap, but once I had to lay her down on the table, she went crazy. I had to hold her still while the doctor gave her a numbing shot and then proceeded to give her 7 stitches. Luckily, he didn't have to cut any hair to stitch it up. Despite all of Camden's screams, cries and pleas to leave, I do have to say that my big girl was so brave. If only Mommy could have been as brave! 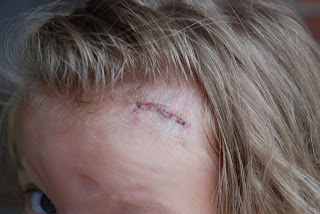 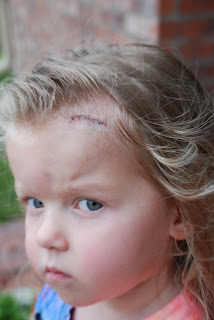 Still able to get a smile out of her, despite a head full of "kitty whiskers" as the doctor called them. 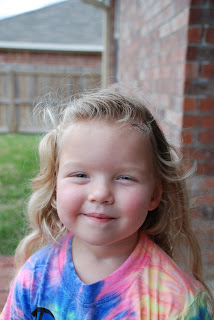