Camden's boo boo is all better

Today had been 9 days since Camden got her stitches and I decided to stop by the doctor's office to see if it was healed enough to have them taken out. The doctor had told me around 10 days, but being the impatient person that I am, I decided to try a little early. The doctor checked it out and said it had healed completely. So, the nurse came in to take the stitches out. Camden was OK until she found out she had to lie down. She started crying hysterically and grabbing me tighter than she ever has before (except when she got the stitches). I finally got her to lie down and held her hands, as well as tried to hold her head still. She was crying so much that her head was moving a lot. The nurse was trying not to cut her hair while cutting the stitches, but with her head moving like it was, I either had to hold it still or we were going to be missing some hair. I told Camden it wasn't going to hurt, but with the first cut came major screams. So, I guess I was wrong. Claire was in the room with us and seemed to gravitate more toward me with every scream. I could see the concern in her eyes and finally the tears started coming from Claire, too. So, I had 2 screaming kids that I was trying to console, all while holding 2 hands and a head still. Lots of fun!!! It seemed like forever to get all 7 stitches cut and out. With every cut came more screams of pain. But, once all 7 were out she was a different kid. The doctor heard all the screams from the girls and brought them each a sucker after it was done. Candy seems to make everything better!! Her head seems to look good. All that was left was a little scab, which should go away soon. As we were leaving Camden said, " I don't want stitches ever again!". I have to agree with her!! 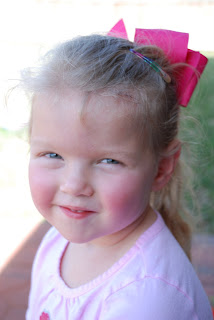 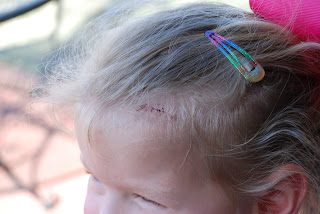 that all sounds very traumatic! :( i meant to leave a comment on your last post about your cute belly. mine is already NOT cute anymore, just huge! i'm okay with that though ;). are y'all finding out what you're having?? honestly every one i know right now is having boys!! we'll see!!